Three women received a golden apple Friday to honor their contributions to the community. They were recipients of the Times-Union’s EVE Awards, an annual celebration of Jacksonville-area women in education, volunteerism and employment. This was the 42nd EVE Awards ceremony, which has honored nearly 150 local women since its inception. The winners are determined by a panel of six previous EVE winners.

Dale Regan has been at Episcopal High School for years as a parent, teacher and now head of the school. She’s the first female and first former Episcopal teacher to lead the school.

“I feel so blessed to have found my passion in 1978 and have the opportunity to grow here,” Regan said. “I was excited, and I thought the glass ceiling just broke to smithereens.”

Regan was nominated for an EVE Award for her work in 2010, which included breaking ground on two $4 million academic halls on the school’s campus. The new spaces add nearly 13,000 square feet of classroom space, and many of the rooms have surround sound, wireless Internet and interactive SMART Board blackboards.

Regan’s commitment to bring innovative teaching methods to the school, as well as spearheading fundraising efforts to make the additions a possibility, is what motivated former EVE winners to select her as the 2011 Education winner.

Regan was nominated by Doug Walker, director of advancement at Episcopal High. In his nomination, he wrote that Regan should be recognized for her “creative and forward-thinking curriculum, taught by faculty who are experts in their subject and dynamic in their instruction.”

Although she’s been head of Episcopal since 2006 and has been instrumental in implementing many changes in the school, she said she never expected to be nominated for an EVE Award.

The other nominees in the education category were Patty Moore Adeeb, executive director of the Deerwood Center at Florida State College at Jacksonville; Judith Rodriguez, president of the American Dietetic Association and professor at University of North Florida; and Carol Matthews, environmental science teacher at The Bolles School.

Jeri Millard is a breast and cervical cancer survivor, and it was her experiences fighting the disease that motivated her to open a boutique for other women to go through the cancer process with dignity.

Millard opened In the Pink, where women can receive prosthetics, wigs and other services to help them through a cancer diagnosis. She volunteers about 60 hours a week in the Jacksonville Beach boutique.

Many of the products are covered by insurance or Medicaid, and if the patient doesn’t have insurance, Millard works to make sure they get what they need for free. It’s a concept that’s catching on in other cities, and Millard plans to open another location soon at Hill Breast Center.

“My goal is that eventually there will be an In the Pink in every major city where there’s a major cancer treatment center so women going through cancer will have that peace of mind,” Millard said.

Millard was nominated by Kristie Naines, principal gifts officer at Mayo Clinic, who described In the Pink as “a place where women laugh, cry and share their experiences. … [In the Pink] makes these daunting tasks less threatening, therapeutic and even occasionally fun.”

The other women who were finalists in the volunteer category were Lesleigh Box, a doctor who opened the River City Clinic; Debbie Gottlieb, co-chair of the St. Vincent’s Foundation DePaul Society; and Barbara Ryan Jackson, chairwoman for the St. Marys Convention and Visitor’s Bureau.

Maureen Burnett took over Key Auto Co. as president and CEO in May 2008, which she said may have been the most difficult time for the auto industry. But Burnett said it was the confidence in her employees that helped the business overcome the difficult economic climate.

“I make sure they get what they need so they can do their jobs effectively,” Burnett said.

From 2009 to 2010, Burnett’s dealerships almost doubled their sales. In the past year, she’s served as president of the Hyundai Advertising Group, serves on the Hyundai Regional Dealer Council and the National Auto Dealers Association.

Last year, her philosophy of treating employees and customers fairly was put to the test when she was encouraged to offer a course to her employees on how to sell to women. Burnett refused.

“I don’t believe anybody should be treated differently,” Burnett said. “I want all of our customers to have the kind of service that I would expect to get.”

Burnett was nominated by Butch Ferrizzi, service manager at Key Auto Co. In his nomination, Ferrizzi wrote, “[Burnett’s] fearless, passionate and ethical leadership has provided a stellar role model for other women in this industry, and for women of all businesses.” 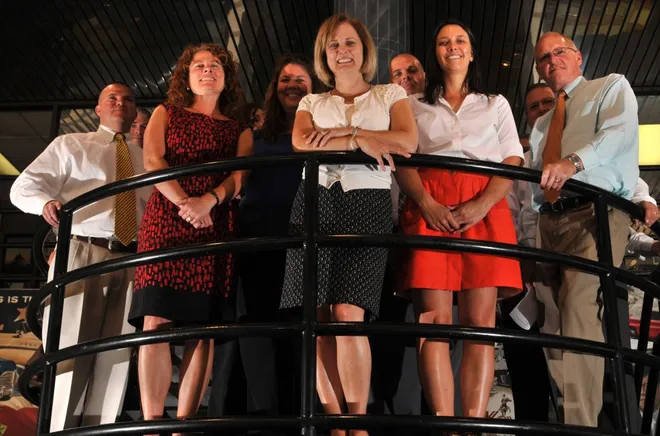