By Jasmine Marshall at the pontevedrarecorder.com As the Jacksonville Dragon Boat Club team returns from its morning trials in Intracoastal waters glistening in the morning sun, the all-woman team paddles in disciplined unity. Arms angled, spines straight, the women gracefully dip their blades into the water, turning a pale pink boat back toward the docks of their Beach Marine suite.“Great job, ladies!” says In the Pink Founder Jeri Millard, welcoming the dragon boating team with a round of applause as they arrive. “Looking good!”

The women are pioneering a movement in Jacksonville with a dragon boating team composed of breast cancer survivors. First formed after Millard learned of the physical and psychological benefits of dragon boating among breast cancer survivors, the group affectionately dubbed “the Mammoglams” is celebrating its fourth year. With the help of husband and head coach Marty Millard and captain Lisa Henry, it’s an endeavor that has snowballed into a support group doubling as a sports team serving more than 25 women and addressing a void of service Jeri Millard had been trying to fill for years.

“(Jeri) always wanted to start a support group,” Marty Millard recalled. “With In the Pink, she handles the physical impact of living with cancer – the wigs, the mastectomy products, anti-radiation creams – all the products that helps survivors live again. But it was hard forming a support group that was emotionally beneficial to everyone involved.”

Occasionally, he said, customers would drop by and mention dragon boating as a viable option. Four years into the store’s opening, the couple finally decided to look into the research that made paddling popular among survivors and decided to get two dragon boats to start a team.

The effect was immediate.

“The thing about being on the water is … the women form such an amazing support structure,” he said. “They get exercise, they’re out in nature, they see dolphins and manatees and the beautiful view of the waterway, and that wall of protection they’ve formed around themselves just falls. Everyone starts chatting and forming friendships and this team kind of grew from that.”

Since then, the club has spawned activities that include holiday parties, post-practice brunches and girls’ nights out. Though the added benefit of living an active lifestyle is fulfilling, it’s comfort, friendship and purpose that drive the passion the Mammoglams have for boating.

As paddling is a sport that promotes unity by its nature, the women find that the combined efforts of their workout equals more than the sum of their parts. For Henry, an athlete who was looking for a sport she could participate in after chemotherapy, boating filled a need she hadn’t even recognized in herself.

“I tell people all the time that I never knew I needed a support group until I had one,” she said, voice breaking with the memory of finally finding solace with other survivors. “Post-chemo, you just feel like a slug, and like you can’t do anything. But then I get on the boat and there’s over 20 other amazing women there with me, and they start to become your family.

“They know what you’ve been through, what you’re going through and so you don’t have that wall,” she continued. “It’s been uplifting, supporting. You don’t worry about your bad days because you can still come, even if you don’t paddle, and everyone will be there for you.”

The sentiment was shared by the Marty and Jeri Millard, who is also a Mammoglam member.

“It’s been such an incredible experience and certainly more than I expected when we first started out,” she said. “There’ve been tragic events and difficult days. Everyone’s been there. But we’ve forged so many friendships and it’s an incredible feeling knowing that they’ll always be there for you.”

Having won a silver medal in Fidelity’s Jacksonville Dragon Boat Festival, the Mammoglams are paddling full steam ahead. In the coming months, they hope to recruit more members and have their sights set on the International Breast Cancer Paddlers’ Commission (IBCPC) festival to be held in Florence, Italy in 2018. The team is currently fundraising via Go Fund Me for the cost of registration and travel expenses and plans to host several fundraising events in the future.

But the Mammoglam’s ultimate goal of providing much needed support over the water remains unchanged.

“Because of (this team), I’ve been able to reclaim a part of my life,” Henry said. “And it’s been an affirmation of our existence. We’re here, and we’re not going anywhere.” 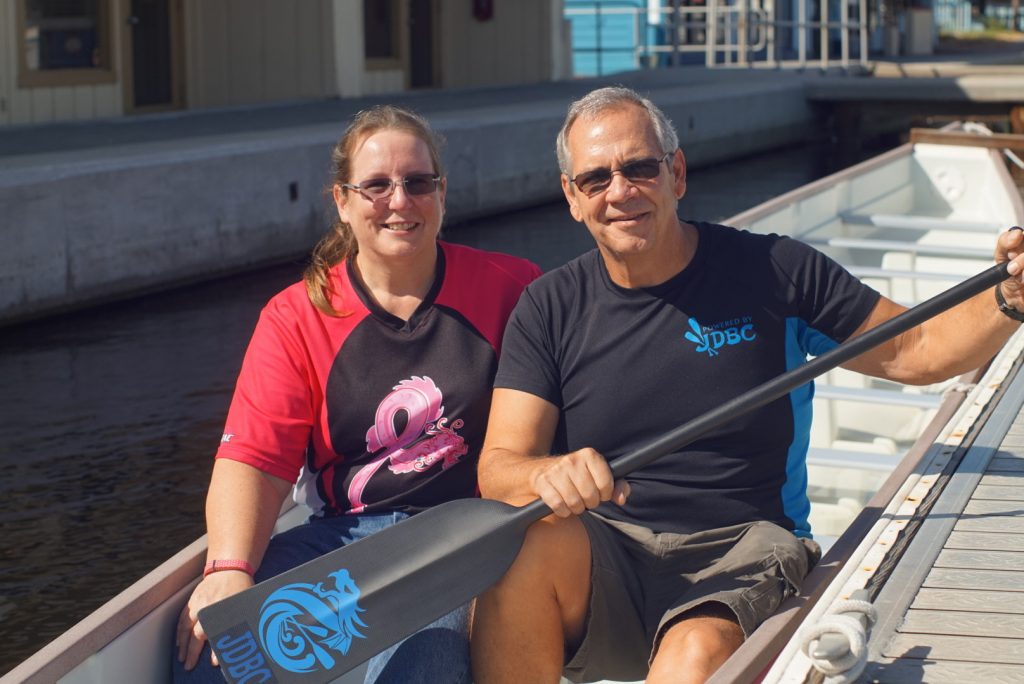